I Remember: The Music of the Holocaust

The Auschwitz II-Birkenau main guard house, “the gate of death.”

At the end Viktor Ullmann’s The Emperor of Atlantis, Kaiser Uberall accepts his fate: he will be the sacrifice which will restore the balance of life and death that his own arrogance and brutality so tragically upset. It is one of the most powerful moments in 20th century opera. It is a moment of hope and high ideals; a plea for humanity, and a promise of peace. It is also a moment of unimaginable horror and tragedy, for the opera was never performed during its composer’s lifetime. Ullmann died in the gas chambers of Auschwitz-Birkenau on 18 October 1944.

Yom HaShoah, Holocaust Remembrance Day, begins tomorrow night. And as we approach that solemn day of remembrance for the millions murdered by the Nazis, I find my thoughts going back to the final moments of Ullman’s opera.

I had the privilege to see it in a rare performance by students at the Curtis Institute in the fall of 2013. The performance was brilliant, and that final scene took my breath away. The Kaiser (baritone Sean Plumb), in all the ceremonial finery of a Fascist despot, slowly opened the door to the chain-link enclosure at the centre of the performance space, despot, stepped over the piles of crumpled papers littering the cage floor, and walked into the embrace of Death (bass Anthony Reed) in the guise of Baron Samedi.

The wads of paper might have been the notations of discarded of memories, or fallen leaves evoking the generations lost in an endless war. In some light, they appeared as bleached bones strewn about the floor of an ossuary. As I watched and listened, I found myself thinking of the last lines of Georg Trakl’s 1915 poem “Grodek:”

O prouder sorrow! You shameless altars!
The searing flame of the imagination
nourishes an unthinkable agony:
the generations yet unborn. 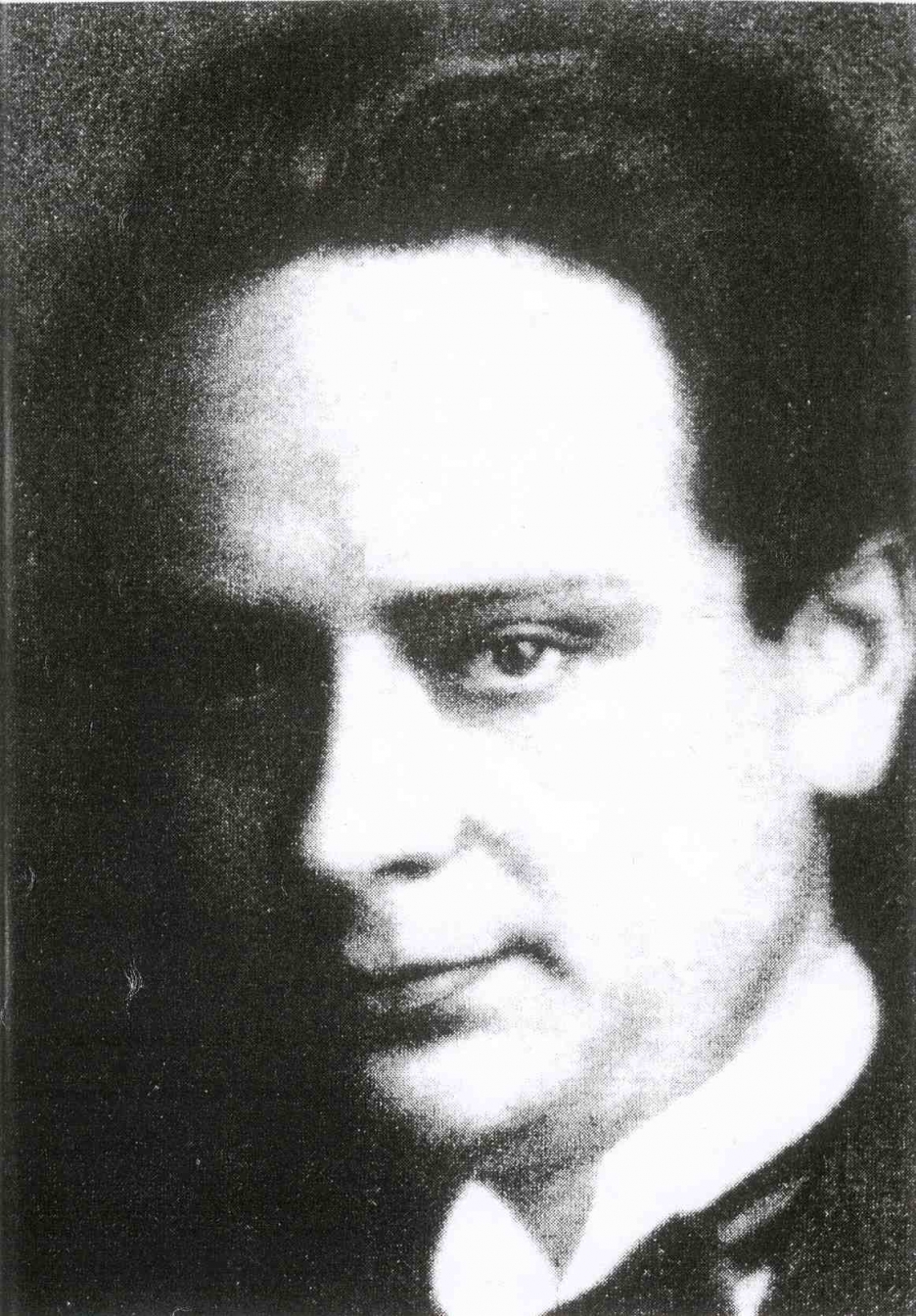 There is a resolution in that instant. Balance is restored. At the moment of closure, all the characters – the Kaiser, Death, the Harlequin, the Drummer, the Soldier, the Maiden and the Loudspeaker – turn toward their own disembodied voices singing through the tinny static of a speaker mounted on a telephone pole: Komm Tod, du unser werter Gast, in unsers Herzens Kammer. Nimm von uns Leben, Leid und Last, führ uns zur Rast nach Schmerz und Jammer. (Come death, our hearts’ honoured guest. Take our lives, suffering, and burdens. Lead us to respite from pain and misery.)

I first heard Der Kaiser von Atlantis in a recording by Lothar Zagrosek and the Leipzig Gewandhausorchester twenty years ago, but I had never seen it performed. I always wondered how it could be performed: this darkly tragicomic masterpiece Ullmann composed in 1944 as an inmate of the Terezin concentration camp. The score had been thought lost for decades. Ullmann had been deported im Osten (to the East) in October 1944, while the opera was still rehearsals by the inmate ensemble.

It’s not clear whether that was just a random act of Nazi barbarism or if the SS guards recognized the opera’s subversive satire and took their revenge on its creator. The Kaiser, whose arrogant presumption that Death is his servant prompts the Grim Reaper to abdicate in protest, is a thinly-veiled caricature of Adolf Hitler. The ensuing war, with unspeakable suffering unrelieved by death, could only be the genocidal horror then sweeping through Europe. Any doubts would have been put to rest by Ullmann’s parodic minor-key quotation of “Deutschland über alles.”

Terezin’s librarian, Emil Utitz, survived the Holocaust, saved the manuscript and passed it to another survivor, Hans Adler, before his death in 1956. It lay in Adler’s desk drawer for two decades before it was rediscovered in 1975. The Emperor of Atlantis finally had its premiere in Amsterdam just before Christmas in 1975, more than thirty years after Ullmann’s death. It has not been frequently performed since – at 55 minutes, it is rather short and difficult to fit into opera company programmes – so the Curtis production was a rare opportunity.

It was also, for me, a profoundly moving emotional experience; an aesthetic and ethical act; in the words of Holocaust scholar Yehuda Bauer, an Amidah – a standing up.

The Holocaust is always with me: as a Jew, as a scholar, and as a human being. It is always with all of us. It was one of the great horrors of a century of horrors. The Nazis slaughtered millions of Jews, Roma, Slavs, and all kinds of people whose heritage, beliefs, and sexuality had no place in Hitler’s perverse fantasy of an Aryan utopia.

The Final Solution was not merely murder on an unimaginable scale, it was erasure. Hitler meant to cleanse his Reich of all contaminants foreign to the Nazi notion of a pure Völksgeimeneschaft. The Nazis purged Jews, Communists, and modernist artists and intellectuals from German universities, newspapers, journals, opera houses, concert halls and memory. Those artists and scholars who hit the black trifecta – philosopher Walter Benjamin, writers Ernst Toller and Josef Roth, composers Stefan Wolpe and Kurt Weill, among others – found themselves on the run from the day of the Reichstagsbrandverordnung in February 1933.

And they ran. Benjamin and Roth briefly found safety in Paris, determined to remain among “the Last Europeans.” Weill and Toller made it to New York, where Wolpe joined them in 1938 after a detour through British Palestine. For all of their hardships – and they were many – they were lucky. Toller did not feel lucky. He hanged himself in 1939 when he received news that his beloved brother and sister had been deported im Osten, to their deaths.

Roth collapsed upon hearing of his friend’s suicide. He staggered around Paris for a few days before dying in a haze of grief and alcohol. Benjamin held on in the City of Light a little longer, finally escaping to the Spanish border, and presumed safety, just ahead of the German blitzkrieg in the summer of 1940. Denied passage by Spanish authorities, he took an overdose of morphine on 26 September 1940.

In Germany, the Nazis began to cleanse German culture of the “degeneracy” of “Judaism, Bolshevism, and Modernism” in the arts and music. Good Germans with good German taste mocked the works of some of Europe’s finest artists at the Entartete Kunst exhibition in Munich in 1937. The artists themselves could hardly protest; by then, virtually all of them were in exile or in concentration camps. Josef Goebbels, and other Nazi Party officials, had made their point. After the show, they either destroyed the paintings or secreted them away in private collections – to make a fast buck from oppression on the international art market.

Composers of Entartete Musik, even long-dead Felix Mendelssohn, who was neither a modernist nor a Communist, but was born to Jewish parents, were banned from concert halls and stages. Franz Schrecker had been one of Germany’s leading opera composers in the 1920s. As a Jew, his fortunes had already begun to fail as the Nazi Party surged during the economic crises of the early 1930s. Following their rise to power in 1933, he could not even find work as a piano instructor. He died of a stroke the following year at the age of 56. 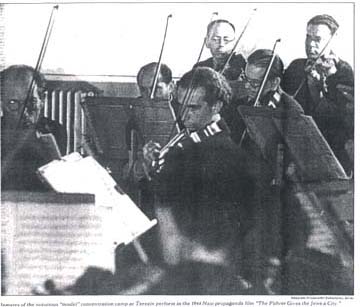 And as the Reich expanded – to Austria in 1938, to Czechoslovakia in 1939, and to the rest of Europe thereafter – so did the Nazi cultural purge. Béla Bartók left Hungary in 1940, but by the start of the Second World War, most “degenerate” composers’ chances of escape were slim to none. The Jewish Czech composers who had thought themselves safe in democratic, cosmopolitan Prague found themselves trapped after the world community sold their country out to Hitler. Erwin Schulhoff – a Communist whose avant-garde music embraced jazz and Dadaism, and whose silent piece In futurum anticipated John Cage’s 4’33” by decades – was arrested and deported to the Wülzburg concentration camp in the summer of 1941. He died a year later from tuberculosis: delirious, coughing up blood, unable to sit up.

His countrymen Pavel Haas and Hans Krása were imprisoned with Ullmann in Terezin. Nazi propaganda portrayed the camp as a “model Jewish settlement” to deflect international condemnation of its racial policies. In reality, it was an abject purgatory, where prisoners of “special merit” might amuse the guards with their talents while they starved and waited to be deported im Osten. Haas, Krása, and Ullmann all died in the gas chambers of Auschwitz.

To be sure, many “degenerate” composers did escape. Bartók, Weill, Wolpe, Arnold Schoenberg, and Ernst Krenek survived. Bartók found the adjustment difficult and died penniless New York shortly after the end of the War. But Weill adapted his talents to the Broadway stage with great success. Schoenberg and Krenek, in university music departments, invigorated a generation of American avant-garde and modernist composers. Wolpe was an inspiration to and champion of the avant-garde movement led by John Cage. 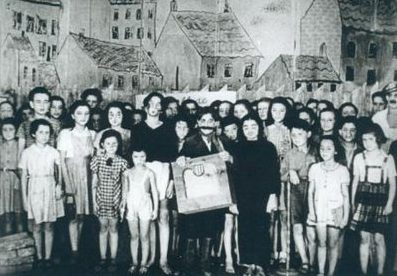 The cast of Brundibár, an childrens opera by Hans Krasá in Terezin. After the SS filmed a performance for propaganda, the entire cast was shipped to Auschwitz with the composer.

Yet there was always a gap in the music of the 20th century; a whole generation significant in its absence and thunderous in its silence. Ullmann, Krasa, Haas, and Schulhoff were names for musicological enquiry, and not for concert programmes. Most of their music was unknown or feared lost; that which was known was rarely played. Their music and their memories were erased along with their bodies. The Nazi plan had succeeded.

Things began to change in the 1970s, around the time that the score for The Emperor of Atlantis turned up in Dr. Adler’s desk drawer. With perestroika, glasnost, and the collapse of the Soviet Union, manuscripts and editions by other composers began to emerge. Scholars and performers alike began to comb through scores, rediscovering genius long thought lost.

In the 1990s, London-Decca Records issued CDs of performances – in many cases the premieres – of works by composers who were murdered by the Nazis, as well as those who narrowly escaped, under the Entartete Musik imprint. They would not be forgotten. In the final tally, a half-century after the Holocaust, the Nazis would not win.

All of this came back to me in a surge of emotion as I watched the Curtis Institute Opera Theatre’s production of The Emperor of Atlantis. As the lights rose and the cast accepted our applause, I simultaneously felt profound grief at the memory of Ullmann’s – and all the other composers’ – horrifying death, and inexpressible joy at his living genius. I am eternally grateful to the young performers at Curtis for giving me this opportunity to perform my Amidah – to stand. To witness. To remember.

We shall never forget.

The Emperor’s Farewell from the Emperor of Atltantis, performed by Iwona Hossa (soprano), Tove Dahlberg (mezzo-soprano), Edgaras Montvidas (tenor), and Gerald Finley (baritone), with the Sinfonietta Cracovia conducted by John Axelrod. From Holocaust: A Music Memorial Film from Auschwitz (BBC, 2005), filmed on location at Auschwitz.